In the near future, the Swedish central bank will start working with a new digital currency based on the blockchain, but this process is in its early stages of development.

On October 15, it was announced that Sveriges Riksbank, which has been actively interested in and sponsoring projects based on distributed ledger technology for many years, is going to launch a full-fledged digital krone as CBCD (central bank digital currency) - the country's official digital currency. But in test mode, so far.

And this will last at least until February 2021, and then, if everything goes well, the project will be extended for another 6 years. Perhaps in a different mode. So far, the project is partially responsible for the Accenture company, and it is based on R3 Corda technologies.

It is known that neither banks nor ordinary users will participate in the "trial run". Everything will be modeled in the closed network of the Central Bank. And now the specialists from Accenture are in the final stage of preparation for the test launch.

It was reported that this is a "multidisciplinary investigation", which will expand official knowledge about CBCD, as well as improve understanding of DLT (distributed ledger technology) and blockchain technologies - two almost synonymous technologies (as declared in the statement), which are already being studied. it took about 3 years and they are still "too unaccomplished" to be used for creation a full-fledged digital krona.

The Swedish central bank has been talking about such an opportunity almost since November 2016, against the background of the gradually growing refusal of the country's citizens from paper money and the transition to more convenient payment methods.

The project was formally launched in September 2017, but the decentralized ledger was considered solely as a possible alternative to the time-tested centralized technologies.

“From a technical point of view, at the current moment we don't see anything that would prevent the creation of a digital crown on the basis of a centralized register” - this is exactly what was stated in the first report of the Riksbank on the project. "The RIX translation system, for example, works precisely through a centralized principle - so CBCD can also be based on it."

Yes, in 2017, the Swedish Central Bank still did not want to make the transition to emerging technologies. The same report stated that DLT is a weak, untested and problematic technology. Mostly because of its novelty.

However, this opinion was revised in February 2020. Including thanks to the improvement of distributed ledger technologies within the framework of the Corda project. It is now being put in opposition to Bitcoin, as a solution that consumes fewer resources, scales much more efficiently and does not allow users to make double spendings.

How this new solution works?

The simulated system works according to the following principle. The main node - the Central Bank - will issue the digital krona to the smaller nodes - the participating banks. Which will then distribute this currency to end users. And those will store it on their smartphones, cards and cryptocurrency wallets. With the help of which, peer-to-peer payments will be made in the simplest possible way. This diagram looks like this visually: 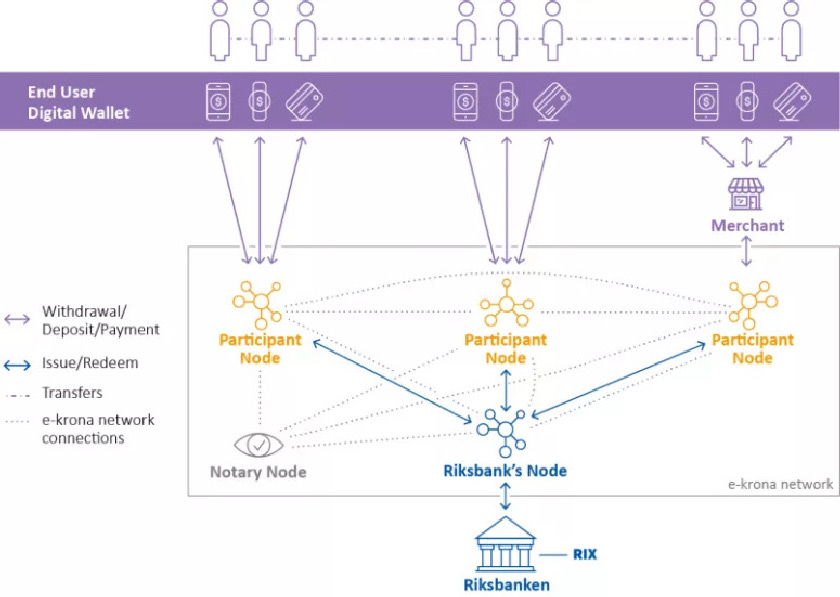 It is immediately clear that there is a serious difference from the principle of decentralization - the main node is controlled exclusively by the Central Bank and only it can add new nodes to the network.

As Don Guo, CEO of brokerage Broctagon Fintech Group, said, “If centralization goes too far, creating a CBDC becomes pointless. The cryptocurrency economy is based on the principle of decentralization, so banks should be especially careful, otherwise their “centralized” project may lose all its advantages and be at the level of conventional fiat currencies, only in electronic form."

The central bank's report also says that it is not yet ready to commit to launching the digital krona at any level. "This is a political decision, not an economic one." However, the current project can demonstrate that this is generally quite possible. And also - how, when, in what form and with what preparation the digital krona can be launched at the official level.

The Riksbank is known to be interested in a decision that will be made by consumers, not just banks, to make multiple retail payments and support the economy. And yes, despite the trend to use centralized technologies, which is still continuing, DLT has always been considered as a possible alternative. Moreover, given the pace of technological progress - even in the long term.

Here we see another approach to CBCD testing - exclusively in the internal banking network, without the involvement of third-party researchers (as in the USA) and without testing on ordinary users (as in China). However, the "secure sandbox" will not allow you to know what actually happens to the official digital token during active use. On the other hand, in this mode, it is much easier to change the settings, including at the fundamental level. So, only time will tell how effective the Swedish approach will be.


Published on the EXBASE.IO based on materials from coindesk.com