According to a report by the Cambridge Center for Alternative Finance, stablecoins are seen by major players as the most significant cryptocurrency development industry. Especially now that the popularity of decentralized finance has led to an explosive growth interest in crypto from all sides.

According to the report, entitled “The 3rd Global Cryptoasset Comparison Study,” stablecoins are considered the most queried and important service and liquidity providers in the Asia-Pacific region, Europe, the Middle East, Africa, North and Latin America, and Caribbean countries.

Actually, here is a chart showing the attitude to various aspects of cryptocurrencies: 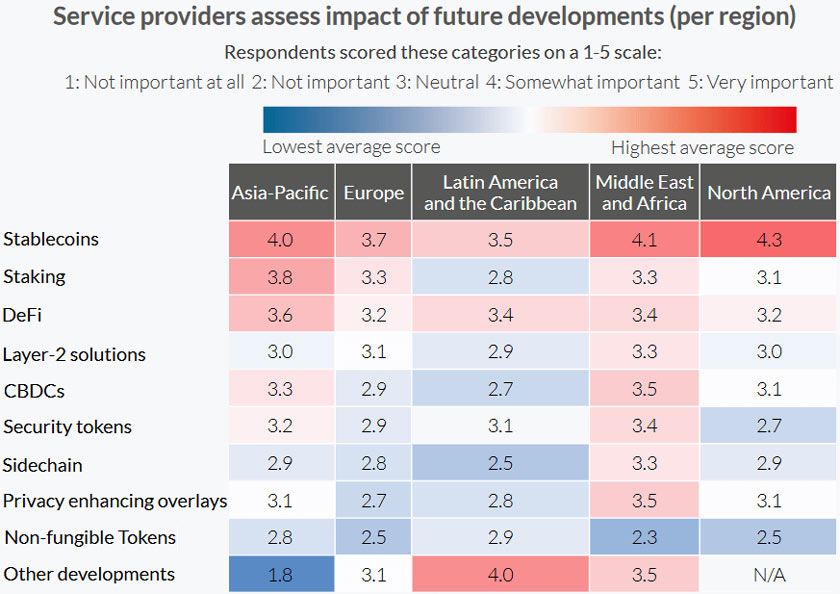 The table shows that DeFi is also seen as important (2nd or 3rd by importance) in all surveyed regions.

The object of the study - "service providers", were defined as "organizations operating in one or more payment, depository and exchange segments of the economy."

The report also indicates that there are also some differences between the opinions of representatives of large and small companies on the importance of certain aspects of the cryptocurrency world.

Judging by these findings, small organizations attach somewhat more importance to stablecoins than representatives of large companies. However, both groups rate their value highly, even when compared to staking, security tokens, and central bank-issued digital currencies (CBDCs).

Here is a chart showing this picture: 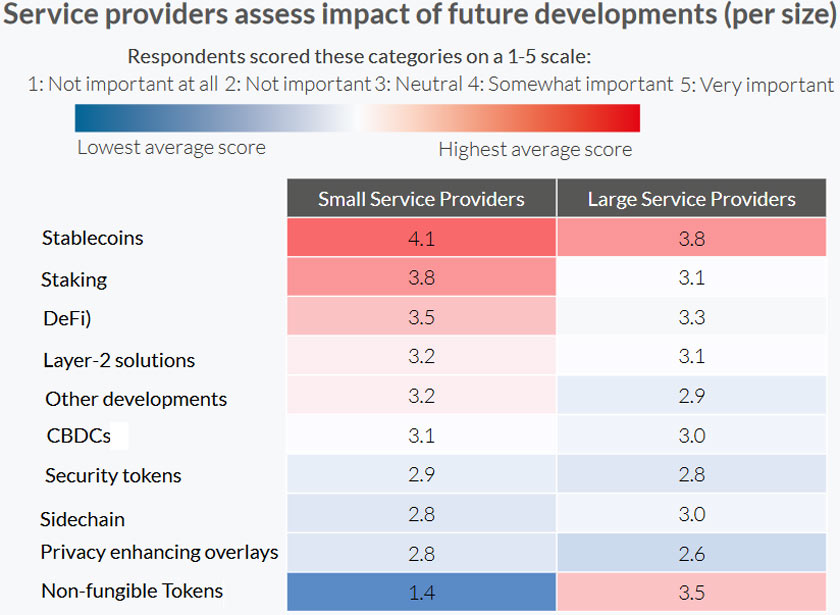 According to experts, "DeFi's high yield / interest rates create a vacuum where a lot of stablecoins are sucked in." Since May 2020, the total market capitalization of this type of coin has doubled, reaching $20 billion by September.

Experts also tried to explain why DeFi itself was rated lower than other areas of cryptocurrency development. The main role, they said, was that the decentralized finance space is still considered somewhat “experimental”. Plus it was clarified that most DeFi applications are still not sufficiently decentralized in most parameters.

"They still rely on 'emergency switches', centralized oracles or centralized tech support," the report says. It was also noted that for many such projects, it is decentralization that is set as the main goal for the near future. And the recent emergence of DeFi Protocol Management Tokens is a major step in that direction.

In addition, it follows from the report that the recent novelty - "fungible tokens" (NFT) in at least 4 out of five surveyed regions are not considered something particularly significant and influencing the picture in the future. But in the Asia-Pacific region "might have some chances." At least in comparison with other developments.

In general, it is not surprising that a type of cryptocurrency that combines both the advantages of using blockchain and the stability of fiat is attracting keen interest around the world. The report is rather interesting in that it clearly demonstrates the main trends in the development of various sectors of the cryptoeconomy in different regions of our planet. And yes, this can be used during the creation of your own investment portfolio.


Published on the EXBASE based on materials from cryptonews.com