EToro, one of the largest cryptocurrency brokerage companies, has released its own report for the third quarter of 2020. It was titled "What Changes the Prices of Crypto Assets" and listed the main factors that cause an increase in the value of a crypt.

The following points are of greatest interest: mergers, raising additional funding, reducing remuneration, new partnerships, introducing staking and statements from official representatives. In addition, it analyzed how things are with prices in the hour, day and week after the event.

And it turned out that the main price change only starts one week after any type of announcement. In this, by the way, the agency The Tie agrees with eToro.

In the first hour, the increase is observed on average by 0.5 percent. Not surprising given the rather sluggish reaction of the market in general and the time it takes for the news to spread widely.

On the first day, the price can be expected to rise by 0.8 - 1.3 percent. This is natural - the market is already starting to react, and the information reaches analysts who make decisions about buying or selling an asset.

And after a week from the date of the announcement, the cost usually rises by 2 to 8.2 percent. What is the maximum for the entire study period.

But which factor plays the main role in the formation of such a price spike?

In the short term, mergers and acquisitions are driving the most growth. Reduction of reward (halving), attracting additional funding, new partnerships and the introduction of staking have a weaker effect in all estimated time periods. Here, in fact, is the graph in which this is displayed: 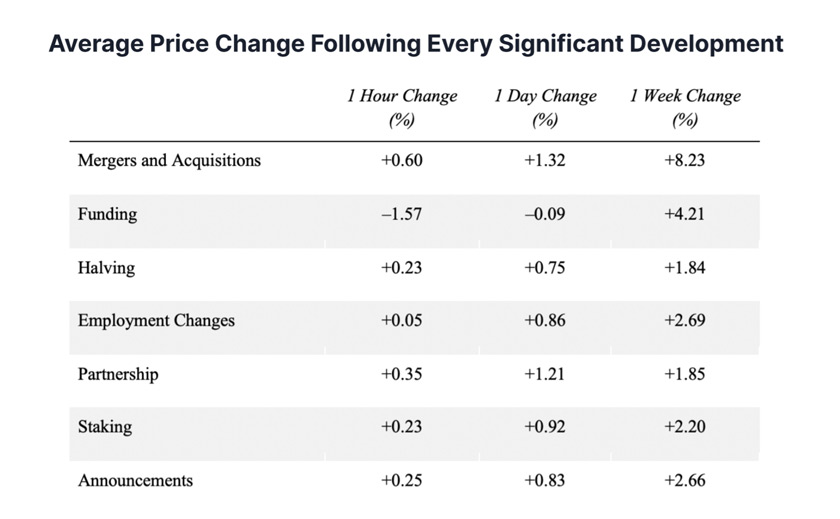 It has been found that there is a 90 percent chance of a significant increase in value one week after the M&A event. On average, 8.23 percent. Presumably, this is due to the fact that most of the news about such significant changes are not announced in advance, but play an extremely significant role in the future fate of the token issuer. For example, because they significantly increase the value of the associated ecosystem, as well as its capitalization.

Here is another table that shows the frequency with which each of the analyzed factors can lead to a price increase: 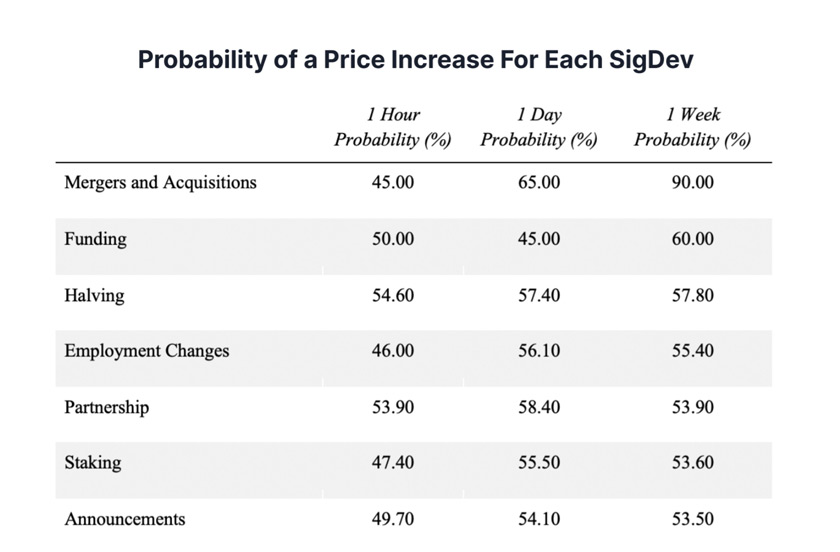 EToro's data is more useful to institutional investors and professional traders than to smaller traders. However, understanding which fundamental factors play a major role in asset pricing is critical. It also highlights how important any information related to a project can be. And it clarifies that exchanges and investment companies should be extremely careful when they are working with it.

As you can see from the report, almost any announcement can have a high probability of affecting the asset price. Therefore, it is extremely important to prevent information leaks and to recognize false rumours aimed at manipulating the market in the right time.


Published on the EXBASE.IO based on materials from cointelegraph.com